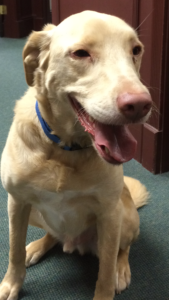 He knows he’s part yellow lab and thinks he’s part weimaraner but he cannot tell for sure. It suffices to say he is, like most of us, from diverse origin. He had a case of entropion when he was born, a fairly common eye condition in dogs where the eyelashes rub against the cornea and irritate it. However, this slight nuisance was eventually cured by his vet and it is ultimately how he got his adoring name, Wink.

He has a peculiar white tip on this tail; he likens it to Rudolph’s red nose. And, of course, he loves to play. His favorite toy is a Frisbee and, when his dad throws it correctly, he runs at full speed, jumps and flies acrobatically through the air to catch it. But much to his dismay, he has yet to catch a flying bird. Despite numerous frustrating, futile attempts, gravity does not seem to work on birds like it does his Frisbee and the birds just fly higher than he can jump.

Wink greets all who walk through his office door with cheerfulness and delight which is the primary reason he was hired at the office (others being continuous stress relief and frequent humor). His warm receptions also seem to help the worried and anxious people that come to the office. That said, he genuinely appreciates any and all treats that are gratuitously provided by those who meet him.

To get directions to this location, click "Directions" or "View larger map" on the map below (Google Maps will open in a new window).